Apple has grown to become one of the biggest and most influential tech companies in the world.

From initial founders to going public to changes in leadership, who owns Apple has changed over the years.

Apple was founded by Steve Jobs and Steve Wozniak in April 1976 at a time when personal computers were a relatively new but fast-growing market.

After going public in 1980, Apple became hugely successful but Steve Jobs and Steve Wozniak left in 1985. Steve Wozniak became an honorary employee, while Steve Jobs went onto to found NeXT.

It wasn’t until 1997 when Apple brought NeXT that Steve Jobs rejoined the company. By 2000, Steve Jobs had become CEO and went onto lead the company and launch the iconic iPhone, open Apple stores and create the number one brand in the world.

The Apple Business model though is facing some tough times these days. The SWOT analysis of Apple demonstrates that while it has some big opportunities, there are some major weaknesses to overcome.

Who Has Shares In Apple?

Both institutional investors and individuals own shares in Apple. As of 2020, over 4,263 institutions account for 61.73% of Apple shares. The remaining shares are mostly individual investors or smaller companies.

Steve Jobs sold his stocks in the initial public offering in 1980. If he had maintained his 11% of shares he would have been worth more than Bill Gates.

After Jobs was ousted from Apple in 1985, he went on to buy Pixar from LucasFilm for $5 million. When Pixar was sold to Disney in 2006, Steve Jobs got an 8% share in Disney as payment. Jobs profitably repurchased shares after rejoining Apple in 1997 and was granted additional shares in the form of stock options as CEO.

Upon Steve Job’s untimely death in 2011, Laurene Powell Jobs inherited his then 7.3% share in Disney, worth an estimated $11.1 billion and his 38.5 million shares in Apple.

Steve Wozniak was a co-founder of Apple and instrumental in developing the Apple II which was in 1977 one of the most successful mas produced microcomputers. Wozniak owned 34.6% of Apple and Jobs the remaining 65.4% of Apple.
Apple’s initial public offering in 1980, with shares being offered at $22 each and an initial market capitalization of $1.38 billion. Prior to the IPO, Wozniak owned 8.7% of the company. During the IPO, he sold down his holding to 7.1% and has reduced it further since that time. At the IPO, this 7.1% stake equated to approximately 3,989,231 shares valued at 87.8 million.

There are both institutional investors and individuals that own shares in Apple. Needless to say, individual investors with a significant amount of shares are either current and former Apple executives.

As reported on Apple proxy statement for 2019 the main individuals who owns Apple shares are mostly active board members of Apple. As of 2019, 4,729,803,000 shares of Apple’s common stock were issued and outstanding. As mentioned in the proxy statement “Unless otherwise indicated, all persons named as beneficial owners of Apple’s common stock have sole voting power and sole investment power with respect to the shares indicated as beneficially owned.”.

What Companies Own Apple Shares? 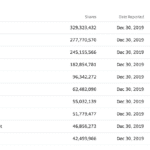 Investment companies that act on behalf of different companies and individuals have a large number of shares in Apple. The top three institutions are the Vanguard Group (7.53%), Blackrock (6.35%) and Berkshire Hathaway (5.60%).

The Vanguard Group is an American company based in Malvern, Pennsylvania. It has over $6.3 trillion in assets under management. The Vanguard Group has the largest number of Apple shares and it also has significant shares in other tech companies like Facebook.

BlackRock, Inc. is an American investment corporation based in New York City. BlackRock is the world’s largest asset manager, with $7.4 trillion in assets under management as of end-Q4 2019.

It’s worth remembering that even a small percentage of Apple shares equates to a massive amount of money.

Arthur D. Levinson is an American businessman and is the current Chairman of Apple Inc. (2011 to present) and CEO of Calico (an Alphabet Inc. venture). He is the former chief executive officer and chairman of Genentech.

Former US Vice President Al Gore has been sitting in Apple’s board of directors since 2003. As reported at the time by Apple, “Al brings an incredible wealth of knowledge and wisdom to Apple from having helped run the largest organization in the world—the United States government—as a Congressman, Senator and our 45th Vice President. Al is also an avid Mac user and does his own video editing in Final Cut Pro,” said Steve Jobs, Apple’s CEO. “Al is going to be a terrific Director and we’re excited and honored that he has chosen Apple as his first private sector board to serve on.”

Jeff Williams joined Apple in 1998 as head of worldwide procurement. In 2004 he was named vice president of Operations and then promoted to chief operating officer in 2015. Prior to Apple, Williams, like Tim Cook, worked for the IBM Corporation.

Apple Inc. is owned by over 4,000 institutions the largest are Vanguard Group and BlackRock, Inc. As mentioned before, institutional investors control over 65% of all shares.

While its major individual shareholders comprise people like Art Levinson, Tim Cook, Al Gore, and other past and present executives.