Tesla is an American electric car and power-train designer, developer, manufacturer and distributor headed by CEO and serial entrepreneur Elon Musk. The Tesla business model is a direct to customer offer.

What Makes Tesla So Different Than Its Competitors.

The Tesla car is a computer on wheels.

Unlike other car manufacturers, Telsa is born digital. Because of that digital focus, Tesla has some fundamental differences built into its DNA.

When Elon Musk started Tesla he approached the car industry with a different mindset – technology first.

As an entrepreneur and technologist, he started the design of Tesla with technology as the start. As an example, the system software receives software updates.

This contrasts with other manufacturers whose tech and infotainment quickly becomes dated during the time you own the car. With a Tesla it keeps getting better!

Right from its infancy, Tesla has focused on offering the best technology ever to go into a car. The result is a frictionless and easy to use experience with such features as:

The car industry is based on dealerships, middlemen.

Rather than use dealerships as a route to market, Tesla decided to go direct and cut out the middlemen, essentially decoupling part of the supply chain.

To buy a Tesla you can either go to one of their own showrooms – essentially a shop or buy directly online. This B2C business model improves Tesla’s overall margin.

A final key part of the business model and one of the most important is the electric storage technology. Tesla continues to lead the industry in terms of energy storage. The result is that Tesla cars deliver the longest range and fastest performance of any electric car in the market.

The vision is to create a cleaner world by reducing CO2 emissions and overall pollution.

Interesting Fact: Elon Musk is the longest-tenured CEO of any automotive manufacturer globally.

Elon Musk holds over 38 million stocks, which equates to a 21.7% ownership in the company which at a market capitalization of $100 Bn would make his share worth $20 Bn. Other key stakeholders include Baillie Gifford & Co with 7.7% and other capital and venture capital firms like FMR LLC, and Capital Ventures International.

Telsa posted a net loss of $775M in 2019 which is lower than its 2018 loss of over $1 billion. However, in the final quarter of 2019, Tesla posted a profit of $132 million. It’s worth noting that at this moment in time, Tesla is expanding its operations.

Is Tesla worth more than GM?

On February 19th, 2020 Tesla reached a market capitalisation of $169.16 billion, an all-time high for Tesla. To put that into perspective, Tesla’s valuation now exceeds that of Ford and GM combined.

It looked like the car market already had enough players. Let’s face it the amount of investment needed to compete in the car industry presents a significant barrier to entry.

Infrastructure, technology, production plants, distribution networks aren’t something you can simply conjure up on a whim.

Yet, Tesla had the vision to transform the industry by producing electric cars. Their goal was to leapfrog rivals who were rigidly committed to cars fuelled by petrol/diesel. At a time when electric batteries were nowhere near the performance level of today that was a brave vision to pursue.

They faced significant technological barriers but overcame them and now they have the worlds most efficient electric car is the Tesla Model Y.

In 2020, Tesla expects to deliver more than 500,000 vehicles, up 36% from 2019. Those are impressive growth figures for the brash startup are proving that the sceptics are wrong.

At the start of 2020, Tesla was also the best performing automaker in terms of total return, sales growth and long-term shareholder value.

As of December 2019, Tesla had over 13,000 charge points across the globe. This global network of charging stations is one part of the “competitive moats” that offers protection from other electric vehicle makers.

Tesla benefits from having fewer parts than an internal combustion vehicle making the total cost of Tesla ownership is significantly lower. There’s no need for expensive tune-ups and replacements.

In the US, Tesla charge points account for between 30 to 40 per cent of all charge points. Clearly this not only creates broader brand awareness but also improves the customer experience, reduces friction when making a purchase decision and provides a physical infrastructure footprint.

With more and more competitors playing catch-up to Tesla it is not to say that the Tesla Business model will not face competition. However, Tesla is creating unique defensible strategies that ensure it will maintain its lead in electric vehicles.

Benefits of Electric Over Fuel Engines 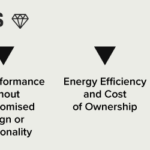 Although Tesla produces what many consider to be luxury cars it is rapidly moving into the mid-market range which appeals to corporate fleet buyers and mid-tier management business.

However, the recently launched Roadster also places Tesla in the high-end sports car market and directly competes with traditional brands such as Porsche, Ferrari, Aston Martin and others.

Another key point is that Tesla is also moving into the commercial vehicle sector, which traditionally is one of the worst culprits for pollution.

Tesla cuts out the middlemen. Buying a Tesla is relatively simple through the online shop. Compare this to buying other vehicles and you have layers of complexity and negotiation – dealers with sales teams who you have to negotiate with to get the final price (often not the one advertised).

How much does spend on marketing?

The company doesn’t spend on advertising. Instead, the company relies on word of mouth from its users and fans. Elon Musk is a celebrity serial entrepreneur and billionaire who attracts huge amounts of media attention and has a substantial social media following e.g. 33M followers on Twitter.

The Tesla business model block of Customer Relationships highlights the use of personalization, self-service and customer intimacy through its communications and app.

Tesla has focused heavily on delivering high-value customer experiences. The customer is firmly placed at the centre of the business. Ordering the car, communications, delivery and the app all provide seamless experiences that are highly personalized.

The core activities of Tesla are the production of electric vehicles, solar energy panels and energy storage (batteries). However, behind these capabilities sits the underlying resources and activities that enable Tesla to have the best EV in the market.

A significant moment is the opening of a new manufacturing plant in China and there are talks of a further plant in Brazil.

Teslas stand out. Tesla cars make a statement. The fact they don’t have exhaust pipes and traditional petrol engines provided a new way to think about the aerodynamics and aesthetic appeal of the car.

The design ins sleek, modern minimalistic but at every point it provides the user with an easy and intuitive interface.

The Model S has been for sale since 2012, and it looks almost exactly the same today as it did back then, but it is still stunning and ahead of its time.

Tesla is in a race to continually innovate and improve the design of its cars, the efficiency of the batteries and the range of cars. To maintain its competitive position Tesla invest approximately 5.5% of its revenue into research and development. It’s worth noting that it also has several research partnerships with companies such as Panasonic.

Elon Musk is an engineer, industrial designer who co-founded Zip2, a web software company, which was acquired by Compaq for $340 million in 1999. Musk then founded X.com, an online bank. It merged with Confinity in 2000, and was subsequently bought by eBay for $1.5 billion in October 2002.

Elon Musk knows software, it’s in his blood and how he thinks. It’s no surprise then that Tesla is ahead of the competition in terms of how the car uses the software. Tesla uses agile principles like “scrums” and “sprints” to develop and improve its software. But this process is also taking place in other parts of its business allowing it to rapidly design and innovate new models.

However, it is the data collection and insights that will help to propel its innovative approach to autonomous driving in the future. The Tesla business is predicated on an integrated ecosystem of chargers, vehicles and software.

Other manufacturers will rely on potential third-party partnerships with Google.

Tesla has built an extensive network of their supercharger and destination recharge stations around the world to expand the widespread adoption of its Electric Vehicles.

Tesla was also first to launch a portable home charger that costs about $500.

Powerful business models are a result of carefully aligning an organizations own capabilities with others to deliver the products and services that make it unique.

Tesla’s core competencies are its technological prowess in terms of innovation, manufacturing, design and software. However, Tesla needed more than that to suceed with electric vehicles it needed several strategic partners.

Charging points: Tesla partners with hotels, restaurants, shopping centres and resorts. Tesla has cemented a partnership deal with EVgo to expand the number of charge points in the US.

Panasonic’s has made an investment of over US$1 billion investment in facilities for lithium-ion cell research, development and production.

The relationship between Tesla and Panaosnic reached an agreement with Tesla to participate in Giga Nevada – the lithium-ion battery and electric vehicle subassembly factory near Reno, Nevada.

Tesla has had significant investments in the form of government subsidies and allowances to buyers of Tesla’s cars.

Tesla buyers receive a $7,500 deduction from their annual U.S. federal tax liability. If the car is leased, the leasing company collects the $7,500 and lowers the payment to the buyer by a corresponding amount over the lease term.

Bloomberg Business News reported in November that a Tesla solar factory for which the State of New York paid $750 million based on a commitment to create 1,500 jobs.

The following are Tesla expense and cost structure:

Tesla’s principal revenue stream is the sales of its vehicles. Despite the heavy invested into its solar panel technologies and Solar City, it has not produced or sold any significant volumes.