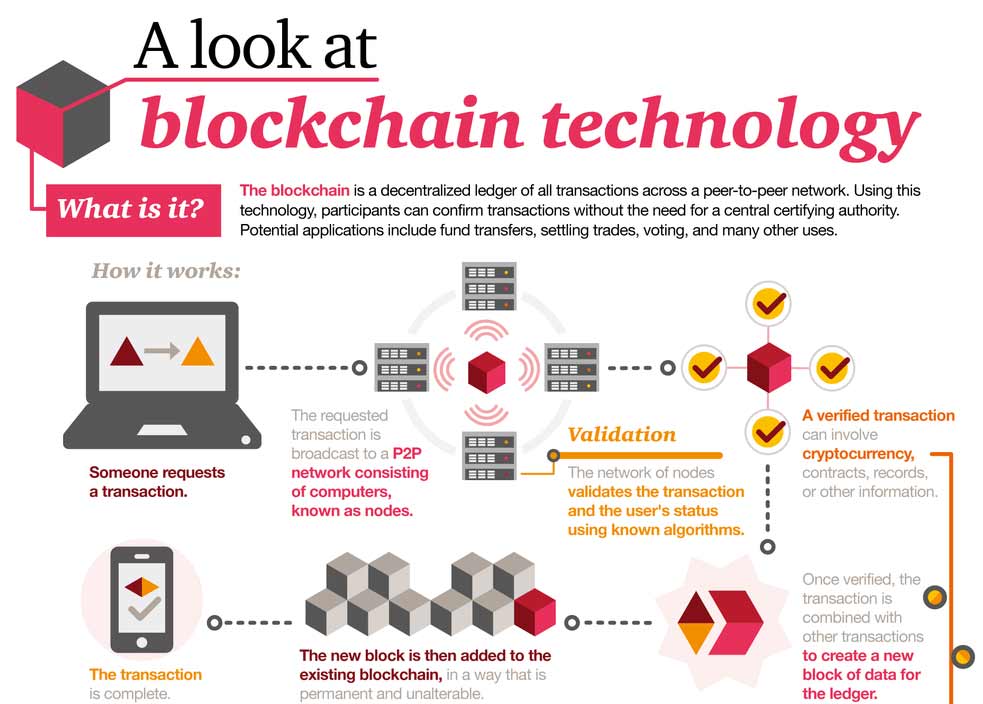 How Blockchain Works Infographic. This post gives you the basic son how the blockchain works.

Contracts, transactions, and their associated records are engrained in  our economic, legal, and political systems. They protect assets and set boundaries for both organisations and people. These records are at the heart of our individual identity and establish trust between agents.

These critical tools that up to now have been centralised and restricted to the boundaries of individual organisations are now about to be transformed.  In a digital world, the way we regulate and maintain administrative control has to change. Assets are increasingly dispersed and networked. Speed is also needed as traditional methods are longer in tune with the pace of digital transactions.

Blockchain technology promises to solve this problem. The blockchain technology was originally conceived with the creation of the bitcoin. Even though other virtual currencies have been developed it is the underlying technology, the blockchain that has ignited the imagination of entrepreneurs and investors. The blockchain is a distributed ledger that can record transactions between two parties efficiently and verify them. The ledger itself can also be programmed to trigger transactions automatically, which if you notice is a key aspect of the Internet of Things. But more on that in another article.

How blockchain works infographic describes the basic processes. Many blockchain primers and infographics dive into the cryptography, trying to explain to lay people how “consensus algorithms”, “hash functions” and digital signatures all work.

Blockchain is an algorithm that sits on a distributed data structure for managing electronic cash without any central administration. In other words people do not know nothing about one another. As with all transactions therefore trust is critical. Originally designed for the crypto-currency Bitcoin, the blockchain architecture was spawned by the desire to avoid (government-guaranteed) money and bank-controlled payments, and their associated charges.

The main problem with any e-cash system is the threat of Double Spend. Electronic money is just data.  Potentially person could spend it twice. Blockchain solves the Double Spend problem without a digital reserve fund or similar form of central control.

Blockchain monitors and verifies transactions by calling upon a de-centralised network of nodes which vote on the order in which transactions occur. As a result the network’s algorithm verifies that each transaction is unique. Once a majority of nodes reaches consensus that all transactions in the recent past are unique (that is, not double spent), they are cryptographically sealed into a block. Each new block is linked to previously sealed blocks to create a chain of accepted history, thereby preserving a verified record of every spend.

For a great way to understand the disruptive potential of the blockchain watch this Ted Talk.