The Facebook business model generates over $70 billion in revenue, $8 billion in net income and has over 2.5 billion users globally. The global social media platform sells advertising to businesses that use the data Facebook collects on users to target ads. Facebook advertising revenues accounted for 98.52% of total revenues.

Facebook is one of the biggest companies in the world, the most widely used and extremely profitable.

What makes Facebook so successful is that it has a powerful combination of the broadest reach, richest user data and best in class ad targeting tools.

The social media statistics show that there are over one billion people worldwide using Instagram at least once per month in 2019, and more than one-fifth (20.6%) of internet users worldwide would use Instagram.

Facebook acquired WhatsApp for a reported $19 billion on February 19, 2014.

The social media statistics show that there are over 1.5 billion users in 180 countries which makes WhatsApp the most popular messaging app in the world.

Facebook acquired Oculus VR on March 25, 2014 for a reported $2.3 billion in cash and stock. Since Facebook’s purchase of Oculus VR in 2014, Oculus has made multiple acquisitions of its own. Perhaps the most noteworthy was the 2015 purchase of Surreal Vision, a company specializing in 3D scene mapping reconstruction.

The Facebook business model also consists of the following companies.

Facebook has evolved and incorporated my different types of services into its business model. Many of these are used to gather valuable data on users to improve ad targeting.

Other tactics are to encourage people to spend more time on the platform e.g. games.

The worlds largest social media network with over 2.5 billion users is the main site for ad revenue.

Facebook Messenger launched in 2011 and since then it has become one of the most downloaded apps. 20 billion messages are sent between people and businesses every month.

Facebook Workplace was first announced on January 14, 2015. It launched as a beta before officially launching in October 2016. It is now reported to have over 3 million paying users.

Facebook Marketplace is a similar business model to eBay – a platform where people can buy and sell products. As of October 2018, more than 800 million people globally use Marketplace each month to browse, buy, or sell items.

Facebook Games wants a cut of the 3+ hours per week that young adult video gamers spend watching other people play. It launched Fb.gg in 2019 and has is specifically targeting competitors such as Twitch. Facebook takes a cut of ‘tips’ and fan subscriptions.

Facebook Audience Network is a direct competitor to Google’s Adsense. Facebook audience network is an ad network powered that serves ads in apps.

Instagram was created by Mike Krieger and Kevin Systrom in 2010. Initially, it was mainly designed to help people share photos and videos, both publicly and privately. As a result of early success, it was acquired by Facebook in 2012. In a short time, Instagram has become one of the biggest social media sites.

WhatsApp is an instant and secure messaging application. It was founded by Jan Koum and Brian Acton in 2009 and later bought by Facebook for $19 billion in 2014. It now has over 1.5 billion users. Unlike the other services, Whatsapp has yet to be monetized – giving plenty of headroom for future growth.

Facebook makes its money by selling advertising to businesses. In 2019, Facebook generated over $70 billion in revenue and had a net income of $18 billion. 92% of all revenue comes from ads on mobile devices.

US and Canada still are the dominate geography for ad revenue accounting for 48.6% of total revenue in Q 2019.

The notable higher average revenue per user is not only because of the more prosperous economy of the US and Canada vs developing countries. With a limited amount of space and Facebook being the dominant social network ad costs are much higher.

Asia-Pacific will continue to be an opportunity for Facebook, outside of China which has its own social networks, and across the region. It rules in India, Indonesia, Thailand, and Singapore. It is still among the top three big social media websites in Japan and Taiwan. Source: Wearesocial. 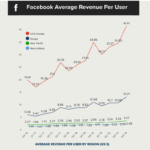 The average revenue per user worldwide is $8.52 as posted by Facebook in its Q4 2019 financial report.

The majority of ad revenue Facebook, a whopping ninety-two per cent comes from businesses paying to target people on mobile devices. Why?

The majority of the world uses Facebook on their mobile phone (source: Wearesocial). Advertisers go where the eyes go.

Advertisers spend money where people spend the most time and pay the most attention.

In other words, how long people spend on a social media platform makes it more attractive to an advertiser. However, the level of engagement rates also affects the choice – how much content is shared.

The majority of Facebook’s reported ad revenue is generated across three platforms:

Facebook doesn’t break-down its ad revenue by platform. However, according to reports, Instagram, the photo-sharing app, generates more than a quarter of Facebook’s total ad revenue.

Despite the political distractions affecting the company over the past two years, Facebook’s business has been on a roll.

It now has over 2.5 billion people using Facebook, Instagram, WhatsApp and Messenger services each day. While there is no doubt that Facebook earnings and revenue growth will slow, the social media giant keeps creating new ways to monetize its user base and it has yet to monetize Whatsapp – a question that remains is if this is possible without losing users.

Taking a deeper dive into the figures you can see that in Asia-Pacific over the last four years the number of users has doubled in Asia-Pacific, the largest growth coming from India. During the same-time quarterly ad revenue has grown by over 400%.

Despite low growth in users in the US and Canada, Facebook ad revenue per user has grown significantly. This is a reflection of the limited ad space available and more marketers now competing for that space.

Facebook has expenses that it incurs across its operations. Here is a breakdown of its main expenses and how they affect its overall revenue model.

The cost of revenue represents the costs associated with operations such as infrastructure that Facebook needs to deliver its services. It includes the following:

Facebook is the world’s number one social media network. However, to stay ahead of the competition Facebook needs to spend money to ensure it stays relevant, competitive and harnesses new technologies.

Hence, R&D is of utmost importance to Facebook to retain and to grow. Research and development is a significant expense for Facebook that will continue.

Facebook’s marketing and sales costs are consistently around 14% of its total revenue. How does marketing spend its marketing money? Facebook spends a considerable amount of its money through public relations across the globe.

The latest string of acquisitions reveals some of how the ways that Facebook intends to strengthen its gaming capabilities and improve the revenue stream from Oculus VR.